WORK OUT YOUR SEED QUANTITIES

In order to work out the number of units required for sowing, please enter your planned sugarbeet acreage. Then adjust the row spacing and the distance between seeds, using the slide bar.

To determine your plant stock per hectare, adjust the slide bar according to the row spacing of your sugarbeets. Then set the number of rows (at least two rows every 10 metres!) and finally enter your counted sugarbeets per row.

We want to encourage you to be #simplydifferent! Do things differently and try something new. Our sugar beet varieties are healthy with excellent performance. The CONVISO® SMART system is now available in the BTS variety range.

We want to encourage you to be #simplydifferent! Do things differently and try something new. Our sugar beet varieties are healthy with excellent performance. The CONVISO® SMART system is now available in the BTS variety range.

CONVISO® SMART is an innovative and highly effective technology for weed control in sustainable sugar beet cultivation. The technology consists of a BTS SMART variety in combination with an herbicide. The new variety BTS SMART 9485 has a tolerance to the herbicide CONVISO® ONE to effectively remove weeds. This tolerance was developed using traditional breeding techniques, based on a naturally occurring tolerance.

For more information on the Conviso Smart system, click here or contact us through your local advisor. We are here for you!Your Betaseed Team

Calories do not make you fat, they just smooth out the wrinkles

We wish you and your loved ones a great Christmas with lots of gifts and treats. Especially after this second exceptional year, it is even more valuable to use the beautiful Christmas days for yourself and your family.
And remember you have earned all the treats that are offered you during the Christmas time! #CHRISTMAS CALORIES DON'T COUNT.

We're going on Christmas break now, too.
However, if there is something important, we will be happy to help and advise you!

Cheers to a new healthy and successful year!

Bred by Betaseed and marketed by Limagrain UK, BTS 1915 leads the Recommended List by a considerable amount - 5% over any other variety - and this is exceptional. Next on the list is KWS Evalotta yielding 103%, followed by last year’s list topper KWS Kortessa at 101.9%, so it’s clear to see the exceptional yield increase brought by BTS 1915,” explains Ron Granger, sugar beet product manager for Limagrain.

“We normally expect to see year on year yield advances of 1-2% in yields – so BTS 1915 is something quite special - and this is at a time when many other arable crop yields have plateaued.”

“Nor is it a one year wonder performance” he adds. “These extremely high yields have been consistent over the last three years that the variety has been in trials - so we are confident in the variety’s ability to perform in different seasons and situations.”

“We are also in the fortunate position where sugar beet breeders are still able to push yields without compromising the sugar content – and this is reflected in BTS1915 with its very acceptable sugar percentage of 17.7.”

Nor is it all about the yields, he continues. “BTS 1915 has excellent agronomic characteristics that make it a very useful variety on-farm. We recognise that varieties also need to establish well, have good bolting tolerance and robust disease resistances to succeed.”

“However when BTS 1915 is sown in the normal sowing window from mid-March onwards, it has shown an excellent bolting tolerance, recording no bolters. This result has been consistent over the last three years, including data from 2019, which we know was a high year for bolting.”

“However, it should be recognised that when BTS 1915 is sown early, the variety might show excessive botling as the Early Sown Bolter trials, conducted as part of the Recommended List trial series demonstrate. “

“The variety has the highest brown rust disease resistance rating on the Recommended List of 8.7 , thus making it the first choice for late lifting where brown rust is potentially the key disease to control.”

BTS 1915 provides an opportunity for growers who want to take the next step-up in yields as in doing so they are raising the bar in sugar beet production even higher - making themselves more resilient against the rising costs of producing a sugar beet crop.

According to figures from the John Nix Pocketbook for Farm Management 2019 edition, the additional benefits of this 5% yield are significant in terms of profitability, irrespective of the crop being low, average or high yielding. 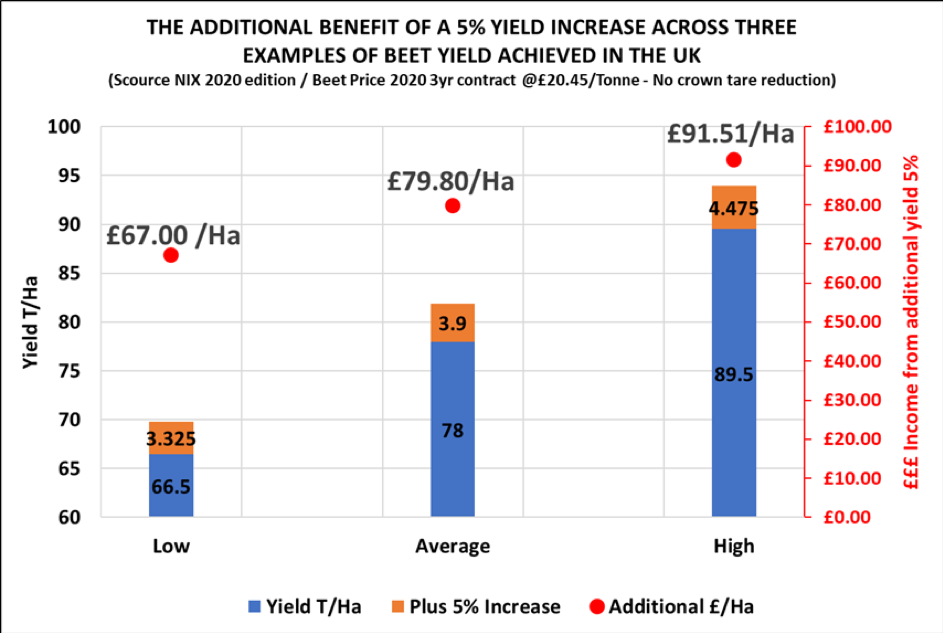 Bred by Betaseed and marketed by Limagrain UK, BTS 4100 offers the highest sugar content of any sugar beet variety on the list at 18.4%, and has produced these high sugar levels consistently over the last three years in Recommended List trials.

“Growers will recognise that on certain soil types or in difficult field conditions, a high sugar content can be hard to achieve; in these situations a variety such as BTS 4100 with a genetically high sugar content offers the best insurance for maximising full yield potential, as expressed in adjusted tonnes”.

Along with these extremely high sugar levels, BTS 4100 offers high adjusted tonne yields of 101.8% -reflecting a step-up over some of the older varieties on the list.

However, whilst yield and sugar content are the top criteria for choosing a new sugar beet variety, factors such as establishment and bolting tolerance are also very important – particularly when deciding which variety is best for your situation, adds Mr Granger.

“For those looking to drill in the first half of March, in an attempt to get crops up and away to combat virus yellows infection, BTS 4100 fits this drilling slot very well. It has excellent bolting tolerance and is one of only a few varieties on the RL, that offers no bolters when drilled in the normal sowing slot.”

“This is combined with good emergence characteristics and a good tolerance to rust. It is also Rhizomania tolerant.” To sum up, BTS 4100 is a high yielding variety with the potential of achieving a top sugar percentage, and also fits the early drilling slot.”

Bred by Betaseed, and marketed by agents Limagrain UK, the 2019 BBRO Recommended List (RL) clearly shows that the yield potential of BTS 1140 is significantly above the most widely grown varieties in 2018, yielding 107.6 % (adjusted tonnes), over three years of trials. BTS 1140 also has a high sugar content of 18%.

“We are in the fortunate position where breeders are still able to push yields without compromising the sugar content – and this is at a time when many other arable crop yields have plateaued.”

However, the value and importance of on-farm characteristics of sugar beet to UK growers is also reflected in this recommendation, he adds. “Whilst yield and sugar content are the top criteria for choosing a new sugar beet variety, factors such as establishment and bolting tolerance are also very important – particularly when deciding which variety is the best for a certain situation.”

“For those looking to drill at the normal to later time from mid-March onwards, as most growers will have done this season, BTS 1140 fits this drilling slot very well. It has excellent bolting tolerance – with only 14 bolters per 1000,000 plants/ha – one of the lowest on the RL list. This is combined with good emergence characteristics and a good tolerance to rust. It is also rhizomania tolerant.” “BTS 1140 is likely to appeal to the grower who wants to take the next step up in yields, and we would encourage growers to try it and take part in raising the bar in sugar beet production even higher.”

2017 saw some of the highest sugar beet yields ever; Limagrain’s varieties BTS 860 and BTS 3325 were no exception and lend themselves well for repeat sowing for the 2019 season.

In fact, BTS 860 was one of the most popular varieties grown in 2017/18 as it has shown itself to be a consistent performer that offers very high yields at 103.9% of controls, alongside one of the highest sugar contents on the Recommended List at 18.2%, says Mr Van der Have.

“Annually, a small part of the national crop is drilled in the early part of March. Early Sown bolting tolerance for varieties sown this early is a key characteristic and BTS 3325 has proven performance in this sector, both commercially and in trials.”

“BTS 3325 has the potential to out-yield many of the traditional varieties drilled in the early sown sector, with the additional benefits of a very high sugar content (18.3%), and excellent disease resistance for rust and powdery mildew.”

Michael Wilton of Stody Estate in Norfolk, is always looking for the best performing sugar beet varieties on the Recommended List which means he only grows an individual variety for two-three years.

“I want a variety that is high yielding with a good, quick establishment percentage as I believe that the two things go hand in hand. A consistent high sugar percentage which increases sugar yield per hectare is what we ultimately get paid for.”

“We grow 240ha’s of sugar beet which is split across 4 varieties. I drill after 5th March, so am looking for a normal drilling, low bolting variety.”

For these reasons Mr Wilton chose to trial 60ha’s of BTS 860 in 2017. “The crop established very well, even on lighter soils. What stood out was its green leaf retention which was good right through the season, so yields continued to build until harvest, which made the variety suitable for late lifting.”

“All of the BTS 860 yielded slightly above the farm average, but one single field that was irrigated stood out, giving us our highest field yield for 2017 at 112t/ha adjusted yields. This well up on our average farm yields by about 15%. The late lifting also delivered sugars above the farm average of 18% at 18.6%.”

“Based on this excellent performance, we will definitely be growing the variety again this year.”